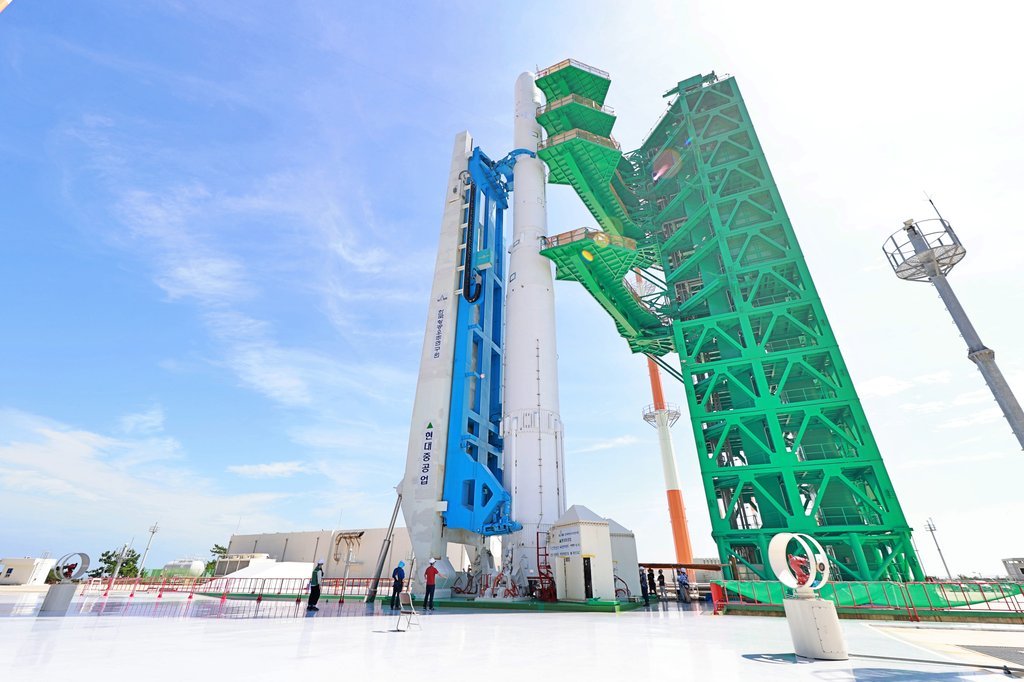 In the sea between South Korea and Japan

Korea Aerospace Research Institute (KARI) is preparing for the second test flight of their Nuri rocket, which is scheduled for launch on June 15th from the Naro Space Center, in South Korea. If this launch is successful, South Korea will become the seventh country to successfully launch a fully indigenous rocket.

Nuri on the launch pad for a wet dress rehearsal (Credit: The Ministry of Science and ICT)

Nuri (누리), which means “world” in Korean, (also known as KSLV-II) is South Korea’s second rocket. It is the successor of the Naro-1 (KSLV-I), South Korea’s first ever rocket, which was successfully launched in 2013. Because the first stage of Naro-1 was built in Russia, Nuri will be the countries first fully indigenous rocket. The rocket was primarily developed by KARI, but around 300 companies also played a role in the development, including Korea Aerospace Industries, Hanwha Aerospace, and Hyundai Heavy Industries.

Test Flight 2 is the second attempt to successfully launch the Nuri rocket after a failed first mission in October 2021. During the first test flight, the rocket successfully flew its the planned altitude of 700 km but the engine burned out 46 seconds early, resulting in the dummy satellite failing to reach its intended orbit.

After investigating the failure, KARI found that the device that anchored the helium tank in the rockets third stage was not fixed securely. KARI has since worked to improve the rocket by strengthening this device. This will hopefully allow Nuri to fly stably during the most dynamic stages of flight.

On this flight, Nuri will carry a dummy satellite to orbit, but KARI plans to take a ~200 kg satellite and a ~1,320 kg dummy satellite to orbit when they next launch Nuri. Once operational, it is hoped that Nuri will be used to launch Earth observing satellites, such as KARI’s KOMPSAT which has previously been launched on the Ariane 5 rocket. KARI has also planned to use Nuri for South Korea’s future Moon exploration missions, with an improved version of the rocket expected to launch a lunar lander in 2030.

A test model of Nuri (Credit: The Ministry of Science and ICT)

A single stage test version of the rocket was launched on November 28, 2018 from Naro Space Centre, allowing KARI to verify the performance of their engine and flight control systems. During the test, the main engine burned for 151 seconds, surpassing the initial goal of 140 seconds. The rocket then reached a maximum altitude of 209 km after flying for 319 seconds. The rocket landed in international waters between Korea’s Jeju Island and Japan’s Okinawa Island.

The rocket’s first stage uses four KRE-075 sea level engines, which together produce 2,612 kN of thrust with a specific impulse (ISP) of 289.1 seconds. The stage burns for 127 seconds and uses Jet A-1 and Liquid Oxygen (LOx) propellant.

The second stage uses a single KRE-075 Vacuum engine, which has a wider nozzle than the Sea Level engine for increased efficiency and performance in a vacuum environment. The stage will burn for 148 seconds, and like the first stage engines, this stage uses Jet A-1 and LOX fuel. The engine produces 788 kN of thrust and has a ISP of 315.4 seconds in vacuum.

The rockets third stage uses one KRE-007 engine which produces 69 kN of thrust. The engine will burn for 498 seconds, and just like the first and second stages it uses Jet A-1 and LOX fuel. The third stage has an ISP of 325.1 seconds in vacuum.