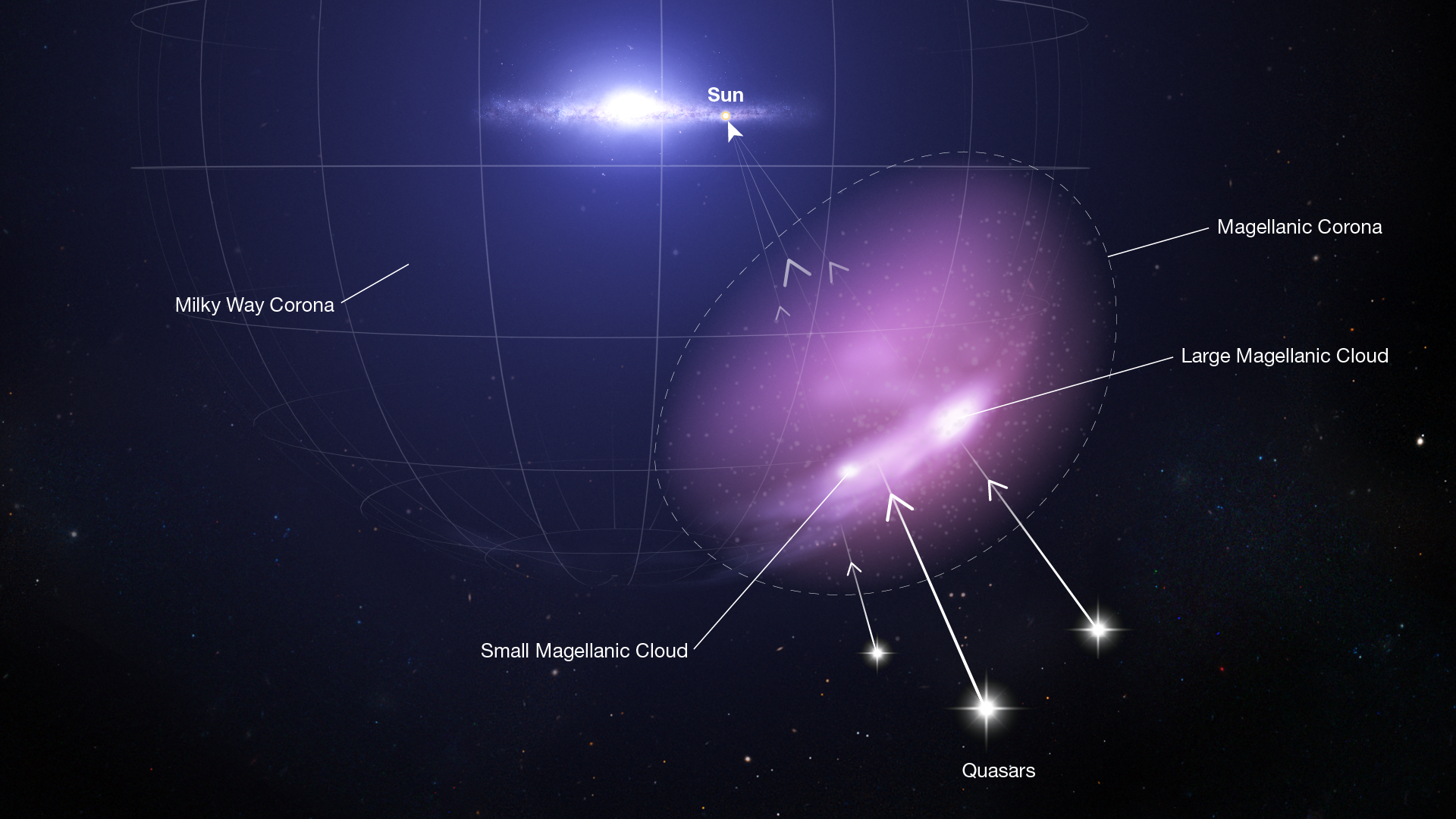 The largest satellite galaxies of the Milky Way — the Large and Small Magellanic Clouds — have been undergoing a treacherous interaction for billions of years. As the galactic pair are pulled toward the Milky Way, they are constantly orbiting each other and unraveling themselves, creating massive trails of gaseous debris. Yet, the galaxies have remained intact and continue to host star formation inside of them — something that has puzzled astronomers and physicists for years.

However, using data from the joint NASA/European Space Agency Hubble Space Telescope and the NASA/Canadian Space Agency/French Space Agency Far Ultraviolet Spectroscopic Explorer (FUSE) spacecraft, a group of scientists have finally figured out how the Large and Small Magellanic Clouds continue to form stars despite their rigorous interaction.

“A lot of people were struggling to explain how these streams of material could be there. If this gas was removed from these galaxies, how are they still forming stars?” said Dhanesh Krishnarao, assistant professor at Colorado College and the lead of the study.

A massive shield of hot supercharged gas called a corona surrounds the Magellanic systems, enveloping the galaxies and preventing their gas supplies from being siphoned off by the nearby Milky Way — which allows them to host favorable environments for star formation.

“Galaxies envelope [sic] themselves in gaseous cocoons, which act as defensive shields against other galaxies,” said Andrew Fox of the Space Telescope Science Institute in Baltimore, Maryland, and co-investigator of the study.

Scientists predicted the existence of the corona around the Large and Small Magellanic clouds several years ago but had no legitimate data to back up the prediction until the Krishnarao et al. study. Additionally, the corona is massive, stretching more than 100,000 light-years from the pair of galaxies — but is effectively invisible. Mapping out the corona required Krishnarao et al. to dig through 30 years of archival telescope data to obtain useful measurements for the corona.

“We discovered that if we included a corona in the simulations of the Magellanic Clouds falling onto the Milky Way, we could explain the mass of extracted gas for the first time. We knew that the Large Magellanic Cloud should be massive enough to have a corona,” said Elena D’Onghia, a co-investigator of the study at the University of Wisconsin–Madison.

Researchers believe that the coronas of galaxies are a remnant of the primordial cloud of gas that collapsed to form the galaxy. This is not the first time a corona has been observed around a galaxy: coronas have been spotted around distant dwarf galaxies numerous times, but researchers have never been able to investigate and probe a corona in as much detail as the corona around the Magellanic galaxies.

The small size of dwarf galaxies makes both the coronas and the galaxies extremely hard to detect, which is one of the reasons why scientists have never been able to deeply investigate these galactic coronas before.

“There’re lots of predictions from computer simulations about what they should look like, how they should interact over billions of years, but observationally we can’t really test most of them because dwarf galaxies are typically just too hard to detect,” said Krishnarao.

“Because they are right on our doorstep, the Magellanic Clouds provide an ideal opportunity to study how dwarf galaxies interact and evolve.”

With the help of Hubble, astronomers have detected a protective “shield” that defends two dwarf galaxies that orbit our larger Milky Way Galaxy.

To find direct evidence of the corona around the Magellanic galaxies, Krishnarao et al. scoured through archived Hubble and FUSE observation data for ultraviolet observations of quasars, which are the extremely bright cores of galaxies with massive black holes, located billions of years behind the Magellanic galaxies. Although the corona is invisible, it can act as a sort of fog or filter when in front of a bright object (i.e. quasars) by obscuring and absorbing distinct light patterns from the quasars. A similar tactic was used by Hubble to map the massive corona surrounding the nearby Andromeda Galaxy.

Krishnarao et al. selected and analyzed the light from 28 quasars behind the Magellanic galaxies, which allowed the team to detect and characterize the corona surrounding the Large Magellanic Cloud — confirming that a corona existed around the Magellanic galaxies. As was expected, signatures of carbon, oxygen, and silicon were seen obscuring the light from the quasars, all of which are elements that make up the halo of hot plasma that is the corona.

“The resolution of Hubble and FUSE were crucial for this study,” said Krishnarao. “The corona gas is so diffuse, it’s barely even there.”

The galactic corona surrounding the Andromeda Galaxy and the 43 quasars used to map it. (Credit: NASA, ESA, and E. Wheatley (STScI))

“It’s a perfect telltale signature that this corona is really there. It really is cocooning the galaxy and protecting it,” said Krishnarao.

But how can such a thin, diffuse shroud of gas keep the Magellanic Clouds from being torn apart?

“Anything that tries to pass into the galaxy has to pass through this material first, so it can absorb some of that impact,” Krishnarao explained.

“In addition, the corona is the first material that can be extracted. While giving up a little bit of the corona, you’re protecting the gas that’s inside of the galaxy itself and able to form new stars.”

Krishnarao et al.’s results were published in the journal Nature on Sept. 28, 2022.