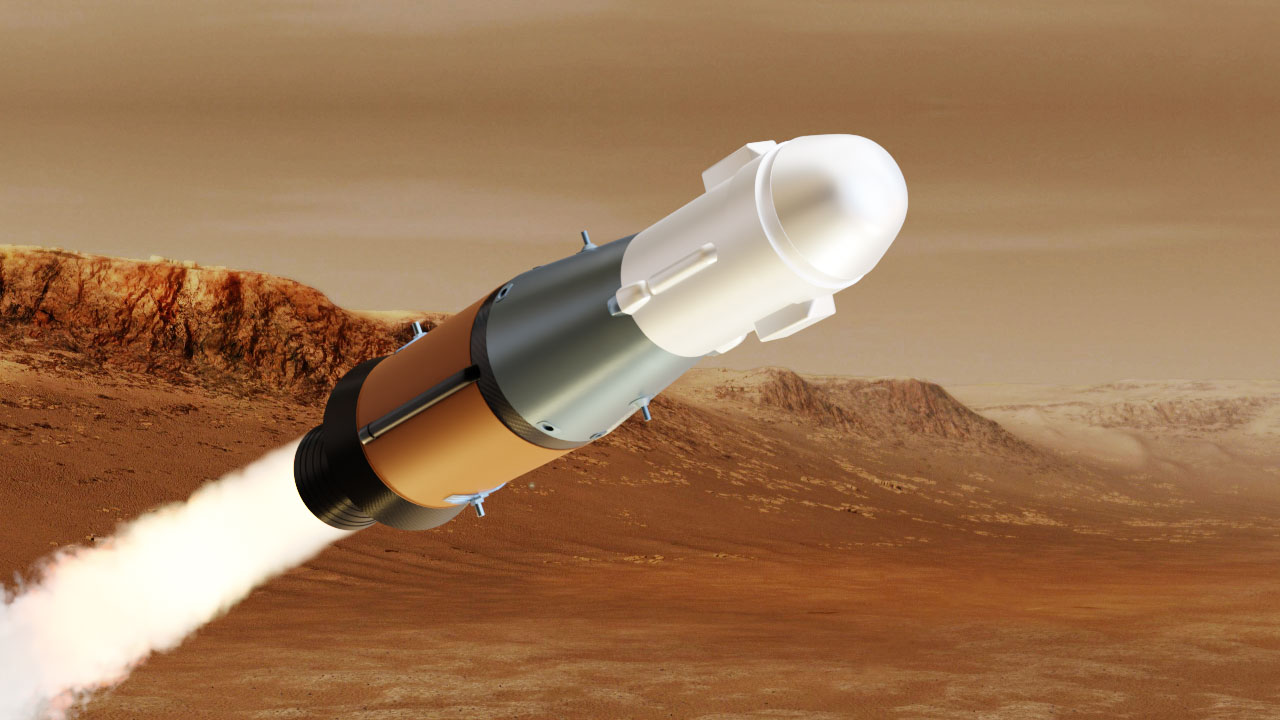 It’s an ask never before attempted: Launch samples off the surface of another planet for return to Earth — using a rocket you first have to launch from Earth using a bigger rocket and then land on Mars.

Yet this is exactly the contract Lockheed Martin has won from NASA for their Mars Ascent Vehicle (MAV), a crucial part of the larger inter-agency Mars Sample Return effort from NASA and the European Space Agency (ESA) currently underway on the Red Planet with the Perseverance rover.

But just how will Lockheed Martin accomplish this feat — as the rocket has to land on the surface, then open up to allow the samples (the payload) to be placed inside, and then launch into Mars orbit so those samples can be retrieved by the waiting ESA Earth Return Orbiter?

“For Mars Ascent Vehicle, inside our company, we have three things: launch vehicle experience, missile experience, and then Mars lander and mission experience. So really we brought all those three things together,” said David Murrow, Senior Manager of Deep Space Exploration Strategy and Business Development for Lockheed Martin’s Corporation Space in an interview with NASASpaceflight.

But to get the rocket to Mars, it has to fit inside an existing, larger rocket’s payload fairing — and it also has to fit inside the aeroshell of its Entry, Descent, and Landing (EDL) system that will protect it during Mars atmospheric entry and touch down on the Red Planet’s surface.

This constrains the size of the rocket to just 2.7 meters in length.

An illustration showing a concept for multiple robots that would team up to ferry to Earth samples collected from the Mars surface by NASA’s Mars Perseverance rover. (Credit: NASA)

Furthermore, once it’s on the surface, it then has to be able to open up to allow the samples it has come to launch to be loaded into its nosecone.

“The way the system is designed, the Mars Ascent Vehicle will be horizontal, held down,” related Murrow when talking about the MAV’s Earth launch and then cruise to and landing on Mars configuration.

“It’ll be in a climate-controlled igloo while it’s on the surface.”

This igloo will act in large part as a way to keep the solid propellant in the rocket’s two stages warmed to the correct operating temperature throughout the mission until the vehicle is ready to launch to Martian orbit.

“After the samples are stuck into the nosecone, then the lid will go on, and then we’re ready to launch,” related Murrow.

For launch, the rocket will first be lofted into the air by springs and, at the correct time and at the correct orientation while in the air, the solid rocket first stage will fire to begin the ascent to Martian orbit.

(Video caption: this animation from NASA and ESA in 2021 shows the basics of how the cached samples from Perseverance will be retrieved by a fetch rover and delivered to the MAV for launch and how the ESA Earth Return Orbiter will collect the samples in orbit and prepare them for a safe journey to Earth. This video was produced just before the decision to split the rover and the MAV into two missions on two different landers was made.)

“It actually gets lofted into the air, and while it’s in the air at the right angle, then those solid rocket motors fire and take it up into orbit. So the initial liftoff, if you will, is mechanically controlled from the lander by being sort of lofted, pushed off by a spring release mechanism, and then the motors fire,” said Murrow.

Overall, the MAV is a two-stage-to-orbit rocket. But unlike on Earth where the second stage would do half, or the vast majority, of the delta-v change to achieve orbital velocity, the first stage here will bring the craft almost to a full orbit, with the second stage then finishing the rest of the job.

This difference is based on Mars’ gravity being one-third that of Earth’s, thus making it possible for a single stage to perform a near-complete ascent to orbit on its own.

But exactly how will the European orbiter find the Orbiting Sample given Mars has no ground tracking stations to precisely define an object’s orbital characteristics?

While there aren’t tracking stations on Mars, the planet’s gravity field is well understood from years of in-situ orbiter observations. That, coupled with the MAV second stage’s radio beacon, will give controllers the information they need to get the ESA Earth Return Orbiter close enough to the Orbiting Sample to see it through reflective light.

(Photo caption: Slide from a 2021 NASA presentation detailing the ascent profile of the MAV to Martian orbit. Credit: NASA)

“The second stage, based on the current design, has an active radio beacon,” related Murrow. “And so we know the orbit that the second stage, with the Orbiting Sample attached, gets into.”

As for the Orbiting Sample, “it will have reflectors so the optical system on the Earth Return Orbiter can find it [after being] targeted to the predicted position of the Orbital Sample.”

Once the Earth Return Orbiter finds the Orbiting Sample, it will need to collect it.

According to Murrow, the first step in the collection process at this point is to seal the samples — which are already sealed inside the Orbiting Sample canister.

“Imagine almost an assembly line sort of thing,” related Murrow. “The Orbiting Sample goes through, and at station one there’s a sealing mechanism.”

Meet Angie Jackman, project manager of the first rocket to launch from the surface of another planet, the Mars Ascent Vehicle. https://t.co/5hcm79OLwU#InternationalWomensDay pic.twitter.com/JSwqUb62vy

Planetary protection is a significant factor in this mission — not just from the standpoint of making sure we don’t accidentally contaminate the samples or Mars with Earth life but also in protecting Earth as we bring portions of Mars to this planet.

“We want to keep Mars pristine, so we don’t want to contaminate it going to Mars. But coming back from Mars, we need to seal it. It’s already sealed inside the canister, but then we seal it again.”

This is called “breaking the chain” and ensures that Mars’ and Earth’s biospheres are kept separate.

“That’s why we have to make sure to break the chain. For a mission like OSIRIS-REx to Bennu, we know it’s sterile. Or a mission to the Moon; it’s sterile. So we don’t have to worry about ‘breaking the chain’. We just bring it back.”

But with such a complex operation with numerous firsts-of-their-kind events, how will Lockheed Martin, NASA, and ESA ensure this all has the best possible chance of working as intended?

“In general, at Lockheed Martin, our philosophy is ‘test like you fly.’ So we do as much testing as we can in a configuration that mimics the flight configuration.”

“There’s obviously some things that you can’t do because you’re not at Mars. But an example of one of the things we’ll do on the Mars Ascent Vehicle is we’re going to do high altitude tests of the second stage out of the Wallops Flight Facility that NASA Langley runs,” said Murrow.

Other elements like Entry, Descent, and Landing at Mars and various other mission environments can be simulated and/or make use of computer modeling to understand the dynamics that will be faced.

For while their record is not perfect, NASA mission planners, engineers, and technicians hold a world-enviable success rate for getting missions safely to the Red Planet’s orbit and/or surface — including highly complex landing operations involving retropulsion, hovering, and sky-crane winch lowering of rovers to the surface.

The MAVs lander, as envisioned after the 2022 mission redesign that will now see the MAV and its associated Fetch rover launch on separate rockets and separate landers to the Red Planet. (Credit: NASA)

In March 2022, however, NASA and ESA confirmed a change to the mission’s overall architecture.

Instead of launching with its sample retrieval rover (the craft that will go get the samples left by Perseverance and bring them back to be loaded onto the MAV) which would have required the needed Mars Entry, Descent, and Landing craft to have a never-before-used-at-Mars 5.4-meter heatshield, the MAV and rover will now launch on separate landers with their respective launches both realigned to 2028.

This change allows both landers to use the proven Entry, Descent, and Landing technology used to successfully deliver Curiosity and Perseverance to Mars as well as use existing rocket payload fairings for their launches from Earth — both of which significantly reduce overall mission risk.

The ESA Earth Return Orbiter will still launch in 2027 under the revised plan and return the samples to Earth in 2033.

The post How Lockheed Martin, NASA will send a rocket to Mars to launch samples off the planet to a waiting European Orbiter appeared first on NASASpaceFlight.com. 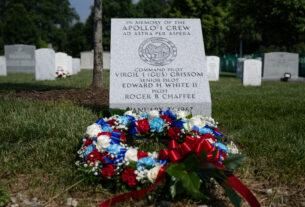 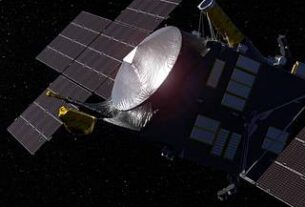 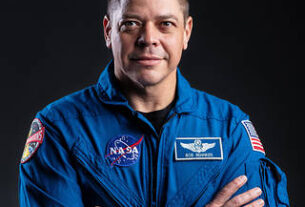