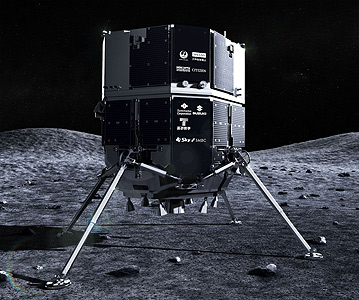 The Atlas Crater, the Moon

The booster will land at Landing Zone 1

SpaceX will the launch the Hakuto-R M1 lunar lander atop the Falcon 9 Block 5 rocket for Japanese company ispace. This will mark the first private Japanese mission to land on the Moon. The rocket will also carry the Lunar Flashlight CubeSat to the Moon for NASA.

Hakuto-R M1 is a technology demonstration mission by Japanese company ispace, which will attempt to land the Rashid rover on the moon. The name “Hakuto” means “white rabbit” in Japanese, which is reference to the country’s folklore, in which it is said that a white rabbit lives on the Moon.

What is now the company ‘ispace’ was originally a team called Hakuto, who took part in the 2008 Google Lunar XPRIZE competition, a race for privately funded teams to land a lunar rover on the Moon. The competition also required the rovers to travel 500 m on the lunar surface and transmit high definition images and videos back to Earth. In 2013, team Hakuto was selected as one of the five finalists in the competition, however in 2018 the Google Lunar XPRIZE competition ended before any of the teams were able to launch their missions as no team was expected to reach the moon or even make a launch attempt before the competition deadline.

Although the competition ended before team Hakuto could launch their mission, the team later formed the company ispace. In 2019, ispace restructured their lunar program, renaming Hakuto to Hakuto-R, and moved forward with plans to launch their first mission in 2022. ispace consider M1 to be a technology demonstration which will validate their lander’s design and technology. They have 10 milestones as shown in the below graphic.

Founder and CEO of ispace, Takeshi Hakamada, said in a press conference, “Our first mission will lay the groundwork for unleashing the moon’s potential and transforming it into a robust and vibrant economic system… We look forward to contributing to NASA’s Artemis program as a commercial lunar transportation service and pioneering the development of future industries and connecting the Earth to the Moon and beyond.”

The primary landing site for this mission will be the Atlas crater, located in the the northeast part of the Moon. The lunar landing is expected to occur in April 2023.

Pending the success of Mission 1, Mission 2 is expected to take place in 2024, and will see a second lunar landing followed by the deployment of a rover and exploration of the lunar surface. Following this, ispace plans for Missions 3 to 9 to focus on establishing the ispace lunar lander as a high frequency and cost effective transportation system. Mission 10 onwards will be focused on constructing an industrial platform which will enable the development of lunar water resources.

Alongside the Rashid rover, ispace announced that their other payload will be a music disc featuring the song ‘SORATO’ by the Japanese rock band Sakanaction. The song was initially released in 2018 as a part of the Team Hakuto campaign for the Google Lunar XPRIZE.

ispace initially wanted to use their own lunar lander for the mission, but it was later decided that the Rashid rover of the Emirates Lunar Mission will be used for Hakuto-R M1. This launch will be the first Moon mission for the United Arab Emirates.

The rover is equipped with four cameras: two high resolution cameras, a microscopic camera, and a thermal imaging camera. The rover also has a Langmuir probe – a device which determines electron temperature and density and the electrical potential of plasma. This will be used to study the Moon’s plasma and investigate why Moon dust is sticky.

Alongside the Hakuto-R, the Falcon 9 will also carry a NASA cubesat, the Lunar Flashlight, as a secondary payload. The Lunar Flashlight is a 6U CubeSat which will be deployed into a highly elliptical orbit which will allow the CubeSat to fly within 15 km over the surface of the lunar South Pole. The satellite will shine lasers into the craters, which are within the permanently shadowed regions of the moon, so it can look for evidence of water ice.

The Lunar Flashlight will be one of the first CubeSats to reach the moon, and will be the first mission to use lasers to search for water ice.

The CubeSat was initially expected to fly alongside a group of other CubeSats for the Artemis 1 mission, however there were propulsion system issues on the CubeSat which meant it didn’t meet the deadline for being integrated onto the rocket.

The CubeSat will be ejected from the Falcon 9’s second stage after the trans-lunar injection. It will then use a sun sensor and solar panels to power the satellite’s 3-axes reaction wheels.

A concept image show the Lunar Flashlight orbiting over the South Pole of the moon. (Credit: NASA)

The booster supporting this mission is B1073, which has supported 4 previous flights. Following stage separation, the Falcon 9 will conduct two burns. These burns aim to softly touch down the booster at Landing Zone 1. 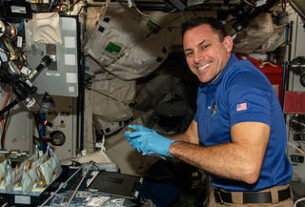