If an official replay is available, we will link it here

Russia was expected to launch Glonass-M No.61, to medium Earth orbit. After a successful launch, the payload was re-designated Kosmos 2564.

There are several constellations of satellites that provide military and commercial navigation information. Together they are known as Global Navigation Satellite Systems (GNSS). The first of these and the best known is the USA Navstar system, better known as the Global Positioning System (GPS). GLONASS is the Russian (formerly Soviet) equivalent system. China has its own Beidou system and the EU has set up its Galileo system. All four systems are now fully operational.

The first GLONASS satellite was launched in 1982. Full coverage was established by 1995, with 24 satellites. In the late 1990s, several of the original satellites started to fail. For a period of time, the failed satellites were not replaced, so the system’s capability was reduced. In 2001, the government decided to make the re-establishment of the full constellation a priority. By 2011 the constellation was fully re-established.

The satellites occupy three distinct orbital planes of 8 satellites per plane, 120 degrees apart from each other. GLONASS-M satellites have a typical life span of seven years. This particular satellite was completed back in 2015 and has been sitting in storage waiting for a suitable launch.

In total, 140 different GLONASS satellites have been launched. Therefore, the vast majority of them are now retired. GLONASS-K satellites (the third generation) have been designed to last for 10 years. They are made using Russian components, which is relatively new.

a central core booster (first stage, which is lit at the same time as the side boosters, on the ground)

the re-startable Fregat “upper” stage (fourth stage) – this is not always used, for example it is not used with Soyuz spacecraft or Progress spacecraft 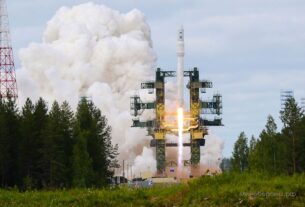 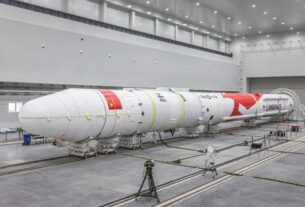