SpaceX will launch their fifth dedicated small satellite rideshare mission, Transporter 5, from Space Launch Complex 40 (SLC-40), Cape Canaveral Space Force Station, in Florida. Onboard Transporter-5 are numerous payloads from several customers. Some customers have flown on previous Transporter missions, such as Satellogic on Transporter 4. The Falcon 9 Block 5 booster, B1061-8 will perform a boostback burn and touchdown on Landing Zone 1 (LZ-1).

Numerous payloads will be packed into the 5.2 meter Falcon 9 fairing and deployed across nearly 90 minutes of mission time after reaching a Sun-Synchronous Orbit (SSO). The deployment sequence is determined by many variables including customer needs and satellite placement on the payload adaptor rings.

Payloads have specific volumetric constraints and interface with one of two rings, one with a 15 inch diameter and the other a 24 inch diameter. The larger ring allows for more volume, or a larger payload. Customers can also purchase the top slot, which allows for the largest possible payload on the mission. The 15-inch ring ports can support a payload mass up to 454kg (1,000lb) while the 24-inch ring ports can support up to a 830kg (1,830lb) payload mass.

Nanoracks, which aims to provide affordable commercial access to space, in conjunction with Voyager will be launching the Outpost Mars Demonstration 1 (OMD-1). The demo aims to test and gather data on metal cutting in space and the reuse of abandoned space vehicles. Due to the difficulty of simulating microgravity in conjunction with a vacuum here on Earth, some experiments must be conducted in space.

A video camera will be mounted to a robotic arm, developed by Maxar Technologies, with a cutting wheel, which when commanded, will cut through three coupons of CRES 316 stainless steel. This stainless steel is the same material used on the United Launch Alliance Vulcan Centaur. The experiment is only set to last a maximum of one orbit before losing battery power. The cutting will be activated about eight to nine minutes after launch, before Second Engine Cutoff.

About 10 minutes later, once the experiment is complete, the team will downlink photo and video data to analyze the results of each of the three coupons. The resulting cut are expected to be similar to each other, but there could still be differences. Previous cutting related experiments have been performed, specifically in the Apollo program, but none this sophisticated and with this method.

One of the biggest goals for OMD-1 is to cut metal without excess debris. Friction milling is the answer. Similar to friction stir welding, a technique used on many United Launch Alliance rockets, the cutting wheel heats up the metal to extreme temperatures. By doing so, the excess metal melts contrary to erupting from the material as macroscopic metal shards.

Three weeks prior to launch, the team mounted the payload onto the Falcon 9 upper stage. In an interview with Everyday Astronaut, Robbie Harris, Director of Advanced Concepts stated, “This is a unique mission for our company. We haven’t really done anything like this.” The mission will serve as a critical component to advancing Voyager and Nanoracks’ goal of converting upper stages into in-orbit outposts.

Prior to launch, students in schools from around Norway submitted various images of themselves, pets, and friends to be stored on the satellite prior to launch. About one week after launch when teams in Norway have made contact with the satellite, the LCD screen will begin to display the stored images, take pictures of them, and beam the results back to Earth. Operations will be conducted from Trondheim, Norway with the team’s own ground station and radio tower.

One of the most critical components is the LCD screen. No LCD screen has ever been put in such harsh conditions; in a vacuum, in microgravity, and unfiltered sunlight. The SelfieSat team has spoken with NASA about the potential outcomes for the LCD screen, which will help NASA perfect the technology ahead of the Artemis program. This program could feature spacesuits or other instruments with externally mounted LCD screens.

Eventually, anyone from Norway and around the world will be able to upload their own images and, in return, received a picture of their image in space. SelfieSat will be able to survive 12 years in it’s 535 km Sun-synchronous orbit before reentering Earth’s atmosphere, but electrical components will fail before then. However, the public will enjoy the idea of bringing space down to Earth for as long as possible.

“We really wanted to inspire a new generation of space engineers in Norway because Norway doesn’t have many space opportunities like the United States,” said Orbit NTNU CEO Ulrik Falk-Petersen in an interview with Everyday Astronaut.

Shifting the focus to Earth, Capella 9, in conjunction with other Capella satellites, will be placed in orbit as part of an Earth observation system. Thirty satellites will eventually make up the constellation. Each satellite uses Synthetic Aperture Radar (SAR) imaging in the X band (8-12 gigahertz(GHz)). This band mainly provides data for urban areas and ice/snow monitoring as well as observations of vegetative decay. The X band does not penetrate vegetation easily and therefore can observe when vegetation is decreasing.

The Como, Italy based company D-Orbit is launching their sixth satellite carrier vehicle on Transporter 5. D-Orbit has flown satellites on previous missions including Transporter 4. The ION Satellite Carrier weighs in at about 100 kg (220 lb) which deploys CubeSats from spring loaded dispenser pockets. The carrier can hold combinations of 1U, 2U, 3U, 3U+, 6U, 6U+, 12U, and 12U+ Cubesats as well as bolted payloads.

The Falcon 9 Block 5 is SpaceX’s partially reusable two-stage medium-lift launch vehicle. Block 5 is the final iteration of the Falcon 9; the goal is to apply all the lessons learned from 56 previous Falcon 9 pre-Block 5 flights into a human-rated reusable rocket. The Falcon 9 contains 3 main components: a reusable first stage, an expendable second stage, and a reusable fairing.

SpaceX introduced a lot of changes on Block 5, allowing it to become the crew-launching reusable rocket that we know today. To start, the Composite Overwrapped Pressure Vessels (COPVs) had to undergo a complete redesign. NASA mandated the COPV redesign, as it had been the cause of both of the Falcon 9 failures: AMOS-6 and CRS-7.

Along with certification for human spaceflight, Block 5 came with a number of other major changes. To increase the amount of flight each booster could handle, and decrease the turnaround time, SpaceX reinforced the landing legs, upgraded the grid fins, and added a carbon fiber interstage. They also added heat-resistant external paint and upgraded the engines. For more information about the changes in Block 5, and the other Blocks of the Falcon 9, click the image to check out this video by the Everyday Astronaut:

Following stage separation, the Falcon 9 will conduct three burns. It will first perform a boostback burn to Return to Launch Site (RTLS) followed by the usual entry and landing burns. These burns will softly touch down the booster on Landing Zone 1 (LZ-1).

SpaceX is the first launch operator that recovers and reuses its fairings. The recovery vessels, Go Ms. Tree and Go Ms. Chief, attempt to recover the fairing halves from the water. After being jettisoned, the two fairing halves use cold gas thrusters to orientate themselves as they descend through the atmosphere. Once at a lower altitude, they deploy para-foils to help them glide down to a soft landing for recovery.

* All times are approximate 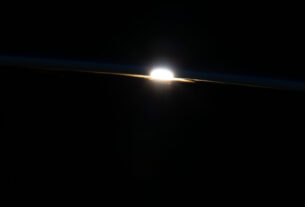 Work on Orion capsules continue as Artemis I prepares to launch