For only the second time this year, Arianespace successfully launched their powerful Ariane 5 ECA+ rocket from French Guiana in South America. The rocket with a thrust of 1,390 kN (310,000 lbf) from it’s core alone, lofted the 6,400 kg (14,100 lb) Eutelsat Konnect VHTS satellite into a geostationary transfer orbit. After separation, the satellite used its onboard propulsion to position it in its final orbit.

What Is The Eutelsat Konnect VHTS Satellite?

The Eutelsat Konnect VHTS (Very High Throughput Satellite) satellite weighs in at a massive 6,400 kg (14,100 lb) and is 8.8 meters (29 feet) tall, meaning it will be the only satellite on this dedicated mission. The Ariane 5 ECA+ has the capability to launch two, smaller, satellites stacked on top of each other as well. Eutelsat Konnect VHTS was built by Thales Alenia Space and will operate in a geostationary orbit positioned over Europe. It’s main goal is to provide high-speed internet to remote and isolated regions of Europe.

Encapsulation of the Eutelsat Konnect VHTS satellite in the payload fairing (Credit: Arianespace)

The advanced technology required to provide this high-speed internet was developed in conjunction with the French Government. This was done via the Centre National d’Etudes Spatiales (CNES), the “Investing in the Future” program (PIA), and the European Space Agency.

At 500 Gbps Ka-band capacity, Eutelsat Konnect VHTS will be host to the most powerful processor ever put into orbit. The processor will enable the satellite to offer capacity allocation flexibility, progressive ground network development, and optimal spectrum use. It uses a SpaceBus Neo as the satellite’s bus and has an overall expected lifetime of 15 years. 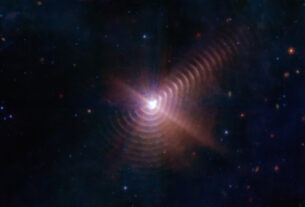 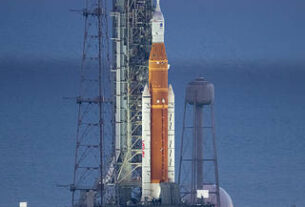 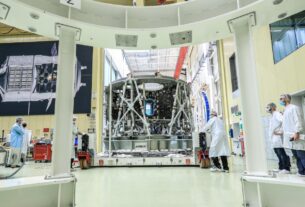