It will crash in remote regions of northern Russia

If an official livestream becomes available, you can find it here

ROSCOSMOS will launch their next Edinaya Kosmicheskaya Sistema (EKS) or Integrated Cosmos System satellite on a Soyuz 2.1b rocket for the Russian Ministry of Defense. EKS 6 (Tundra 6) is the sixth satellite of the series. The rocket will lift off on November 2, 2022, from the Plesetsk Cosmodrome, in Russia. This mission will mark the eighth launch from this launch site.

As is typical with military satellites, their naming conventions can be quite confusing. The official name of the satellite, as mentioned above, is Edinaya Kosmicheskaya Sistema (EKS) or, in English: Integrated Cosmos System. Another common name is Tundra, which seems to have no specific meaning.

The EKS is a new-generation early-warning satellite system. The Tundra satellites operate in highly elliptical orbits and are designed to monitor regions from which ballistic missiles could potentially be launched against Russia.

There were two generations of predecessors of the EKS system: the US-K and US-KMO satellites. The latter worked in highly elliptical orbits and had a significant disadvantage in its viewing geometry: the satellites could easily be blinded by the light of the setting Sun. The latter ancestor was introduced in 1991, was equipped with upgraded infrared sensors, and operated in geosynchronous orbits.

Each EKS satellite serves the purpose of providing early-warning of global missile launches and baseline communications for the military. It can detect ballistic missile launches from land and sea and predict their trajectory. These types of satellites are widespread in the militaries of nations that have access to orbit. The design lifetime is at least 7.5 years.

The satellite bus, or the power center and foundation of the satellite, is built by RKK Energia and is known by the acronym “USP”. The acronym stands for the Universal Space Platform, also known as Victoria. As the name suggests, this bus is flexible and can accommodate many satellite designs and needs. It also can operate anywhere from a low Earth orbit to a geostationary orbit. The USP bus cannot raise or lower its orbit and therefore depends on direct orbit injection. It does not use a pressurized compartment for the onboard electronics.

More information on the EKS constellation can be found here.

Five EKS satellites are currently in orbit, with all active and operational as of publication. Each has been placed in a Molniya orbit of about 38500 x 1600km, 63.5°. It is reasonable to conclude that the EKS 6 satellite will join the others in a similar orbit.

A total of ten satellites has been the stated goal for the group, with all to be deployed by 2022. However, that no longer seems possible due to the limited amount of time remaining.

ROSCOSMOS’s Soyuz is a multi-use medium-lift launch vehicle that was introduced in far 1966 and since then has been the workhorse of the Soviet/Russian space program. It is capable to launch civilian and military satellites, as well as cargo and crewed missions to the ISS. Over the decades, several variants of the Soyuz rocket have been developed. Soyuz 2.1b is one of its latest iterations that belongs to the Soyuz-2 rocket family.

The first stage of the Soyuz 2.1b rocket is composed of 4 side boosters that are powered by RD-107A engines. Each one of the boosters has a conical shape and a dry weight of 3,784 kg. It is approximately 19.6 meters in length, with a diameter of 2.7 meters. Each side booster has two vernier thrusters that are used for flight control.

The RD-107A engine runs on rocket-grade kerosene (RP-1) and liquid oxygen (LOx). The propellants are stored in the pressurized aluminum alloy tanks, the kerosene tank is located in the cylindrical part of the booster, and the LOx one is in the conical section. Each one of those engines have 4 combustion chambers and together they are capable of producing a thrust of 840 kN at sea level and 1,020 kN in a vacuum.

The third stage of a Soyuz-2 rocket has a height of 6.7 meters, a diameter of 2.7 meters, and a dry mass of 2,355 kg. One interesting thing about the RD-0124 engine on this stage is that it starts its ignition sequence prior to stage separation. This process is called “hot fire staging”. 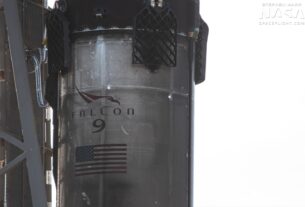 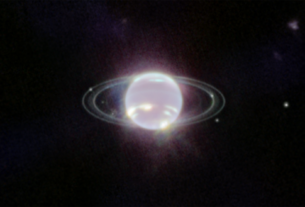 Neptune Shows Off Its Rings in Near-Infrared Light 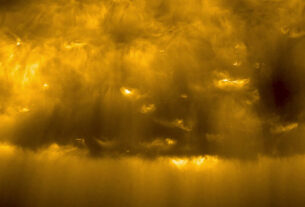 The Sun as you’ve never seen it before