Dragon CRS-2 SpX-25 (CRS-25) is a Commercial Resupply Service mission that flew to the International Space Station (ISS). SpaceX was awarded this mission by NASA back in 2016 and launched it on its Falcon 9 Block 5 rocket using a Cargo Dragon 2, C208-3. The rocket lifted off from Launch Complex 39A, at the Kennedy Space Center in Florida. CRS-25 was the fifth flight for SpaceX under NASA’s CRS Phase 2 contract and SpaceX’s 30th launch in 2022 compared to a total of 31 launches in 2021. On board are ~2,650 kg (~5,800 lb) of food, hardware, and scientific research.

SpaceX’s Cargo Dragon arrived at the ISS on schedule and autonomously docked to the forward facing docking port of the Harmony module at 15:21 UTC. The Expedition 67 crew then proceeded with hatch opening to unload the space freighter’s goods.

The ISS is a lab like no other, so there are dozens of new experiments that will be delivered there by SpaceX’s Dragon. In addition to the research payloads, Dragon will ferry crew supplies such as clothes, food, and hardware and equipment up to the ISS. NASA’s ELaNa 45 mission also hitches a ride on CRS-25 as an auxiliary payload consisting of five CubeSats.

On board of Cargo Dragon C208-3 are dozens of science experiments and technology demonstrations. The following list is only an excerpt of what has been ferried to the ISS. More information on the different science payloads can be found on the websites of NASA and the ISS National Lab.

Genes in Space-9Materials International Space Station Experiment-16-CommercialRodent Research-22 (RR-22)The Effect of Microgravity on Human Brain OrganoidsCulturing of Human Myocytes in Microgravity: An In Vitro Model to Evaluate Therapeutics to Counteract Muscle WastingRing Sheared DropMicrogravity as a Model for Immunological Senescense and its Impact on Tissue Stem Cells and RegenerationStructure and Stability of Foams and EmulsionsStudy of Induced Pluripotent Stem Cells (iPSCs) in MicrogravityP&G Telescience Investigation of Detergent ExperimentsEarth Surface Mineral Dust Source InvestigationDynamics of Microbiomes in SpaceBiopolymer Research for In-Situ Capabilities

ELaNa is an initiative that was proposed by NASA and is managed by the Launch Services Program (LSP) at NASA’s Kennedy Space Center. The main aim of this program is to collaborate with universities all across the US to design, manufacture, and launch research satellites into space. ELaNa brings university students closer to real space missions, giving them opportunities to dive in and get involved in the process from A to Z, from designing and assembling CubeSats, to launching and operating them. ELaNa 45 consist of the following CubeSats:

Dragon C208-3 separated from the second stage of the Falcon 9 Block 5 at ~T+12 min. After that, it performed a series of thruster firings to adjust its orbit and reach the ISS. The spacecraft arrived at the ISS ~38 hours later, on July 16, at 15:21 UTC (11:21 EDT). Dragon autonomously docked to the ISS’ Harmony module. Upon Dragon’s arrival, the crew proceeded with unloading the cargo.

Dragon C208-3 will spend around one month at the ISS with its mission ending in August. After that, the spacecraft will travel back to Earth and will splash down under parachutes off the coast of Florida, returning valuable research and cargo to Earth.

All times are approximate.

SpaceX’s Falcon 9 Block 5 is a medium-lift launch vehicle that stands out among others for its partial reusability. By re-flying boosters and fairings, SpaceX not only cuts down the cost of space access, but also increases the reliability of the rocket. Block 5 is the final iteration of the Falcon 9 that is designed, manufactured, and operated by SpaceX.

The rocket consists of a reusable first stage, an interstage, and a second stage. Falcon 9 Block 5 can be flown with either a fairing or a Dragon spacecraft. On the SpX-25 mission, the Cargo Dragon C208-3 will be used to deliver research and other payloads to the ISS.

The Falcon 9’s first stage consists of aluminum-lithium alloy tanks for propellants and four landing legs, which are stowed at the base and deploy just before landing. Nine sea-level Merlin 1D engines power this stage. The second stage also consists of tanks for propellants and is powered by a single vacuum optimized Merlin engine or MVac. The main difference between these two variations of the Merlin engine is that the latter has an expanded nozzle that results in improved performance in near-vacuum conditions. The second stage is what will carry Dragon to its intended orbit allowing the spacecraft to rendezvous with the ISS.

The Merlin engine runs on rocket-grade kerosene (RP-1) and liquid oxygen (LOx), and uses a gas generator cycle. Falcon 9 uses helium to backfill the propellant tanks as RP-1 and LOx are being consumed by the engines during ascent.

The interstage connects the first and second stages of the vehicle and is responsible for their separation during flight. It also accommodates four hypersonic grid fins at the base. They help to orient the booster during re-entry.

The booster supporting this mission is B1067-5. It has already flown four times, with CRS-25 being its fifth flight delivering a Dragon capsule to the ISS for the fourth. This booster has flown two crew and two cargo missions with Türksat 5B being the only launch that didn’t deliver a Dragon into orbit.

The CRS-25 mission is the third mission to the ISS for Cargo Dragon C208-3. Its first mission was CRS-21, SpaceX’ first launch under the CRS-2 contract. CRS-23 on August 29, 2021 marks its second flight with CRS-25 being the third flight to the ISS already.

Cargo Dragon 2 is 8.1 m (26.6 ft in) in height and 3.7 meters (12 feet) in diameter. Compared to the original Cargo Dragon, the upgraded spacecraft can and will automatically dock to the ISS. The old version had to be manually berthed by the Canadarm2.

Overall, the CRS-2 SpX-25 mission’s success criteria will be successful deployment of the Cargo Dragon 2 to the dedicated orbit, its docking to the ISS, and recovery of the booster.

How ESA works with the EU to advance European space 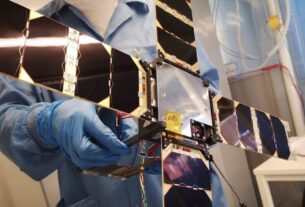