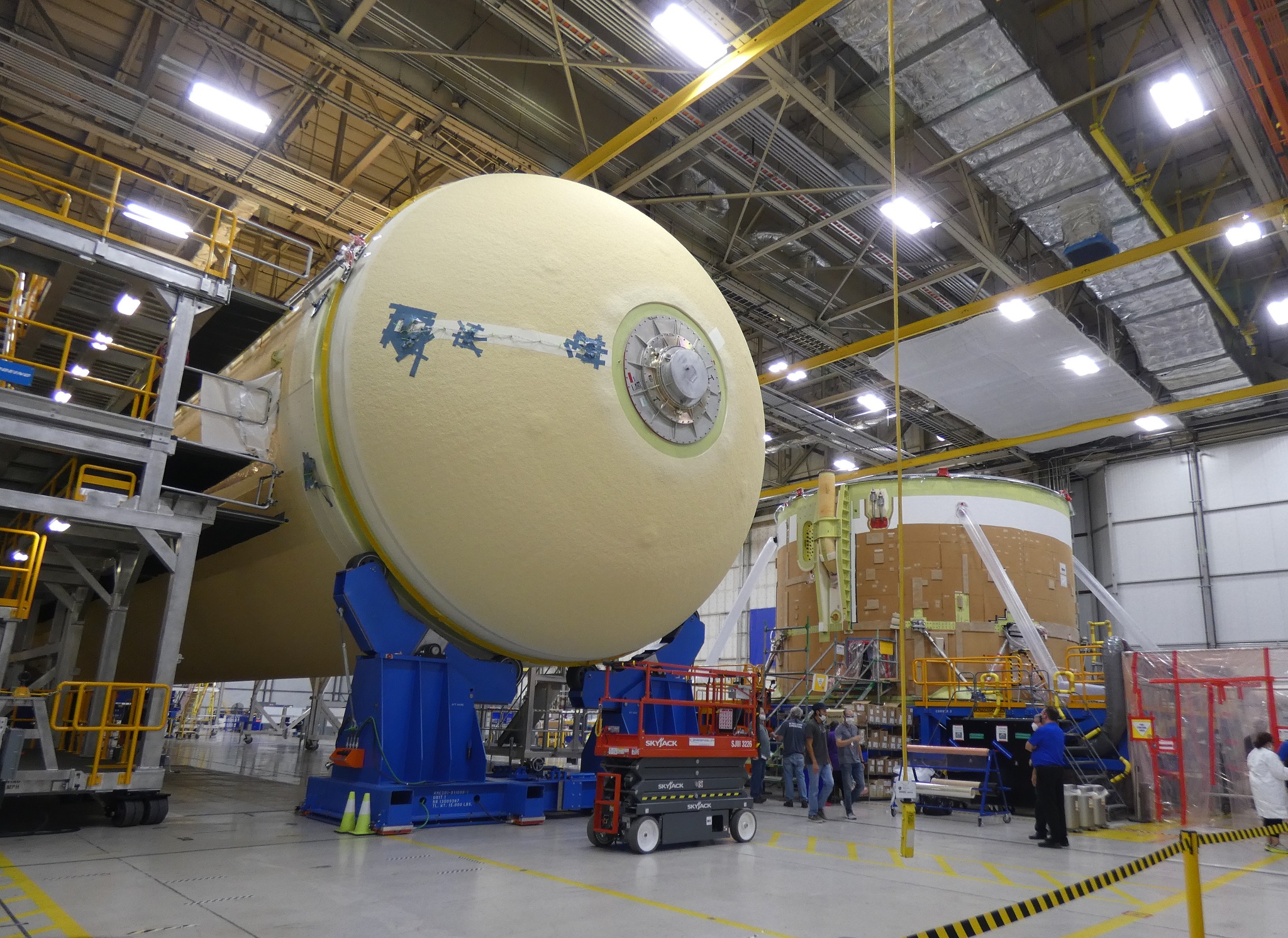 Boeing is continuing final assembly work for the second Space Launch System (SLS) Core Stage at the Michoud Assembly Facility (MAF) in New Orleans, with plans to complete production and deliver the rocket stage to NASA next year in March 2023. The space agency’s prime contractor for SLS Core Stages is wrapping up standalone integration of the engine section/boattail assembly of the most complicated element of the launch vehicle.

Following subassembly functional testing, Boeing plans to break the engine section over from its current vertical orientation to horizontal and then mate it to the upper “four-fifths” of the stage in late October. The four RS-25 engines would then be installed late this year, leading to final integrated function testing of the whole stage over the holidays into early next year ahead of the planned March delivery date.

Production work on Core Stage-2, Boeing’s second flight article build, is progressing towards the final join of the stage elements later this year. The rocket stage will help launch a crew of four astronauts on the Artemis 2 mission to circumnavigate the Moon, currently forecasted no earlier than May 2024.

The engine section and boattail for the stage are nearing the end of standalone integration. “We’re finishing up system integration and final electrical work to get into functional test,” Amanda Gertjejansen, Boeing’s Core Stage 2 Engine Section Integrated Product Team Lead, said in a July 21 interview with NASASpaceflight.

The stage’s thrust vector control (TVC) system and the RS-25 engines both use hydraulics supplied by systems driven by four CAPUs situated above the engines. The exhaust for each one is expelled through a tube that runs out to a port opening at the bottom of the stage on the boattail base heatshield.

The final orbital tube welds in the engine compartment are being finished along with electrical work to splice development flight instrumentation (DFI) sensors into wire harnesses inside. “Our harness routing is mostly complete,” Gertjejansen said. “For the most part it’s connector mates, splices, and sensor bonds.”

“As you test out your harnesses, once you [finished testing] then you can splice, and now you’re good to put in your sensors,” Gregg Eldridge, NASA SLS Stages Element Office Resident Management Office (RMO) Manager, noted in the July 21 interview.

The LOX feedlines were delivered to MAF later than expected due to COVID issues with the supplier. Partly in response, the Boeing and NASA team at Michoud decided to mate the boattail to the bottom of the engine section earlier in the production sequence than originally planned.

The boattail was bolted to the bottom of the engine section in June and July of 2021. “[The delay in the LOX feedlines] was another reason that we wanted to go ahead and mate the boattail early, it opened up additional work to keep everybody busy,” Tim Burroughs, Boeing’s Core Stage 2 Vehicle Manager, said in the interview.

“Looking back, it’s kind of been a blessing in disguise because it opened up another layer [of jobs], you can get more technicians in there. It really paid dividends [and] I think that’s the way we’ll [do it in the future].”

The upper “four-fifths” of the rocket stage are already connected. The top three elements — the forward skirt, the LOX tank, and the intertank — were first connected vertically, with that “forward join” work completed late in 2021. The LH2 tank was then mated to the forward join in March.

After the top of the LH2 tank was bolted to the bottom of the intertank in March to structurally connect the pieces in March, an access kit was installed in the intertank to allow engineers to work inside the volume and since then Boeing has been making the other connections to integrate the systems in the four joined elements.

At this point, they are working on the final jobs to prepare the rest of the stage for the engine section mate. “We’re putting our press lines on; another lesson learned [is] we’re starting out from the intertank,” Burroughs noted.

Pressurization lines run the length of the two propellant tanks, mostly on the exterior of the stage. “In fact, they’re actually going on [beginning] today,” Burroughs said.

“We had some issues trying to vent the CS-1 (Core Stage-1) tank [during assembly] with different tools we made, 3-D printed, mocked-up tools. They didn’t work out as well as desired, so another lesson learned was to go ahead and vent the propellant tanks through the press lines. That’s the reason we’re starting now, and we’ll make those final connections.”

“Once we get the press lines hooked up to the intertank, which started today, that’s the last scope of work in the intertank,” Burroughs added. “[Then] we’re going to pull that access kit, at that point it’s either [install the aft] manifold or [the] systems tunnel, they’re kind of neck and neck, [whichever] makes the most sense.”

The LH2 tank aft manifold is a salad bowl-shaped assembly that mates to the bottom of the tank and is where the four LH2 engine feedlines and the fill and drain line from the engine section connect to the tank. The work schedule for the manifold was delayed by Hurricane Ida.

(Photo Caption: The aft manifold assembly for the Core Stage-2 liquid hydrogen (LH2) tank is seen in an offline subassembly integration area at MAF on July 20. Corrosion damage to the manifold from Hurricane Ida, which passed close to the facility last August 29, setback work on the manifold, and delayed installation on the stage. It is now expected to be attached in the coming weeks.)

“It got some corrosion based on some damage [from the hurricane],” Burroughs said. “That set us back a little while, we had to send the manifold back to the supplier, that’s the reason the manifold is not [already installed]. It’s in subassembly now, it’s due to go on here in a couple of weeks.”

Following the installation of the aft manifold, the LH2 prevalves would then be installed on the manifold in preparation for engine section mate.

The systems tunnel is a cable tray that runs along the outside of the stage that houses wiring for computer networking and device data within the stage. The tunnel is attached to the stage in two sections. Custom tooling is used to stage the base plates of the cable tray and most of the cabling itself offline, before the tool is rolled into the final assembly area, underneath the stage, raised, and the tunnel section attached.

The whole four-fifths assembly has to be rotated so that the attachment area is facing where the systems tunnel tool is positioned for installation. An upper section was already attached to the LOX tank and the second, longer stretch is being prepared for attachment to the LH2 tank.

The access kit in the intertank and other scaffolding inside or around the vehicle would need to be removed before it can be rotated. “Most of us want to get the manifold bolted up and then rotate to pick up the systems tunnel while we’re putting prevalves on and doing all the other harnesses and TPS related to the prevalves.”

Some work in the forward skirt that was paused earlier has also now resumed. “We did a production hold on [some of the] forward skirt work to finish,” Burroughs said. “There were some questions that came up after Green Run testing.”

“There was some analysis and there was a concern that we may have to go into the [LOX] tank and do some work on the slosh baffles. That’s all now behind us, that stop work order was lifted about three weeks ago so that opened up about 48 jobs inside the forward skirt that we’ll go ahead [and do].”

(Photo Caption: The aft portion of the upper four-fifths of Core Stage-2 is seen at MAF on July 20. The +Z side of the stage is seen here, with the LH2 tank on the left and the intertank on the right. A few sets of mounting locations for one of the two LOX feedlines is seen to the right of the work platforms, along with the opening with the feedlines route from the bottom of the LOX tank through the interior of the intertank and then out to where they are mounted to the exterior of the LH2 tank.)

Making the move in May put all the stage hardware in the same area, which allowed air-conditioning to be applied in a smaller part of the facility. The hardware was also moved completely into the final assembly area this time, which also allowed a curtain to be put up to help make the air conditioning more effective.

“One of the things that we needed to do was to get it inside the curtain as fast as we could,” Burroughs said. Thermal protection system (TPS) spray-on foam insulation (SOFI) is applied to cryogenic main propulsion system equipment inside and outside the engine section barrel and it has temperature and humidity constraints for spraying.

“If you walk the factory, especially today, you’ll feel the environmental changes when we get inside this curtain,” Burroughs said, referring to a typically hot, humid July day in New Orleans. He noted that foam sprays on one set of aft reaction structure (ARS) beams that support the LOX feedlines at the top of the engine section barrel were performed before the move because there was some concern about access to the area inside final assembly. 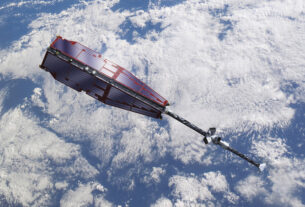 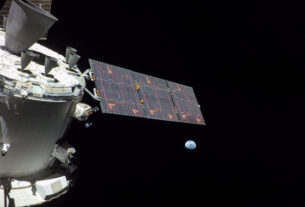 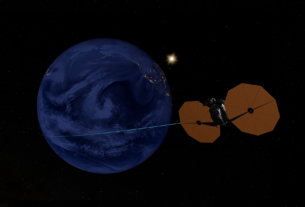