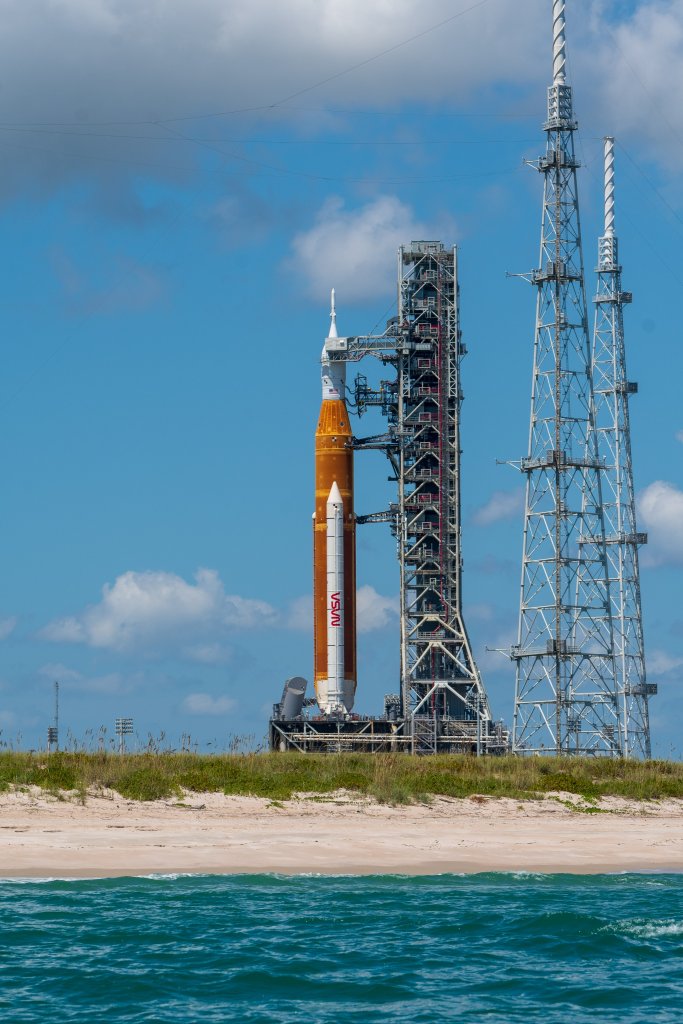 Artemis I, the first launch of the Space Launch System

No; first-stage recovery is not a capability of the Space Launch System

No, the launch abort system (LAS) and fairing are not recovered

Tim Dodd, the Everyday Astronaut, will be streaming at T-3.5 hours; come ask questions and join the conversation live!

NASA is set to launch the Orion spacecraft to a distant retrograde lunar orbit atop the Space Launch System (SLS) for its maiden launch. Launching from Launch Complex 39B, at the Kennedy Space Center, in Florida, the Artemis I mission will certify both Orion and the SLS Block 1 rocket for crewed spaceflight; its next mission–aptly named Artemis II–will be crewed, and bring a yet-announced crew to lunar orbit (but will not land on the lunar surface).

This orbit will mark the furthest a spacecraft meant for crew will have been from Earth at 450,000 km. Additionally, this mission will mark the longest a spacecraft will have free-flown (not docked to another spacecraft or space station), with a planned mission duration of 42 days. At the time of launch, the SLS Block 1 rocket will be the most powerful rocket in the world (although, SpaceX’s Starship rocket will take this record shortly).

In addition to the Orion spacecraft, SLS will launch 10 6U smallsats as part of the low-cost CubeSat mission. They are mounted on the Stage Adapter. It is currently unknown when these payloads will be deployed.

SLS ahead of launch (Credit: NASA)

Artemis I (originally known as Exploration Mission 1 (EM-1)) was announced in 2012 following the cancellation of the Constellation program. With it, NASA announced that the SLS rocket would bring the Orion spacecraft and European Service Module, which is based on the Automated Transfer Vehicle (an ISS resupply spacecraft), to lunar orbit. With the goal of bringing humans back to the moon safely and sustainably (unlike Apollo), the Artemis program is very different from the Apollo program.

To start, the most notable difference is that the Artemis program will require several launches to return humans to the lunar surface, whereas Apollo only required a single launch. This allows for the program to bring significantly more to the surface, with the Starship Human Landing System (HLS) being able to deliver up to 150 metric tonnes to the surface–an unprecedented amount of cargo.

The mission will start with the launch of the SLS vehicle, which will then undergo the following:

Roughly eight hours after launch, Orion will perform its first trajectory correction burn, which will be the first burn of the service module. Orion will spend the next three days heading toward the moon. On day six, Orion will perform a powered flyby of the moon, getting to within 60 miles of the surface. It will then spend three days getting into a Distant Retrograde Orbit (DRO) –an extremely stable orbit due to the interactions between the spacecraft and Lagrange points. Ten days after launch, Orion will be in DRO, and on day 11 Orion will surpass the Apollo 13 record for furthest a crew spacecraft has been from the Earth.

Fourteen days after entering into DRO (on flight day 24), Orion will conduct yet another burn to leave DRO. On flight day 26, Orion will reach its furthest point from Earth, at 450,000 km. From there, Orion will make its way home, flying past the moon for the last time, and reentering and splashing down on day 43. Orion is expected to hit the Earth’s atmosphere at 40,000 kph. During reentry, the spacecraft will be surrounded by plasma that is roughly 3,000 Kelvin (2727 C).

What Is The Space Launch System Block 1B?

The Space Launch System is a fully-expendable super heavy-lift launch vehicle developed by NASA and subcontracted out to Boeing, ULA, Aerojet Rocketdyne, and Northrop Grumman. Following the cancellation of the Constellation program, the SLS vehicle is a replacement for the Ares I and Ares V launch vehicles. Alongside Starship, the SLS will be the US’ access to deep space for the coming decades.

The SRBs on SLS are an extended version of the Space Shuttle’s SRBs–the SRBs flown on the shuttle were four segments tall, whereas the SRBs on SLS are five segments tall. This means that the SRBs produce roughly 25% more thrust, at 16 million Newtons each, and have an exhaust velocity of 2.37 km/s. For Artemis I, the casings for the SRBs are flight-proven, having each supported several previous missions. However, unlike with the Space Shuttle, the SRBs are not going to be recovered.

A five-segment SRB ahead of testing (Credit: Jack Beyer)

The core stage of SLS is a sustainer stage that runs on liquid hydrogen (LH2) and liquid oxygen (LOx). A sustainer stage is a stage that is lit on the ground and remains lit until orbit. The main propulsion system is attached to the bottom of the core stage and is home to the four RS-25 engines. Similar to the SRB casings, all four of the RS-25s on the Artemis I mission are flight-proven, having each supported many shuttle flights. Unfortunately, the engines will be expended on this flight. The core stage is 65 meters tall and 8.4 meters wide. The stage uses autogenous pressurization to backfill the tank.

The RS-25 is a fuel-rich dual-shaft staged combustion cycle engine that runs on LH2 and LOx. The engine produces 2.279 MN of thrust in a vacuum, with an ISP of 4.436 km/s.

The SLS cores stage being lowered onto the test stand at Stennis (Credit: NASA)

The second stage of SLS for the Artemis I mission is the Interim Cryogenic Propulsion Stage (ICPS), which is derived from the Delta Cryogenic Second Stage. ICPS is 5 meters wide and hosts a single RL10B-2 engine. This engine produces 110 kN of thrust with an exhaust velocity (ISP) of 4.565 km/s. The engine is capable of being restarted 15 times. 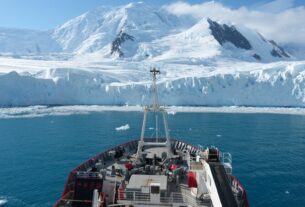 Glacier calving and a whole lot of mixing 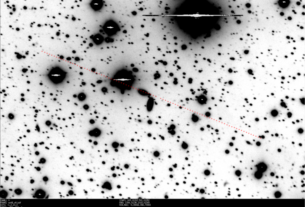 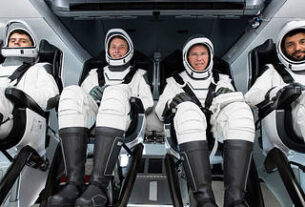